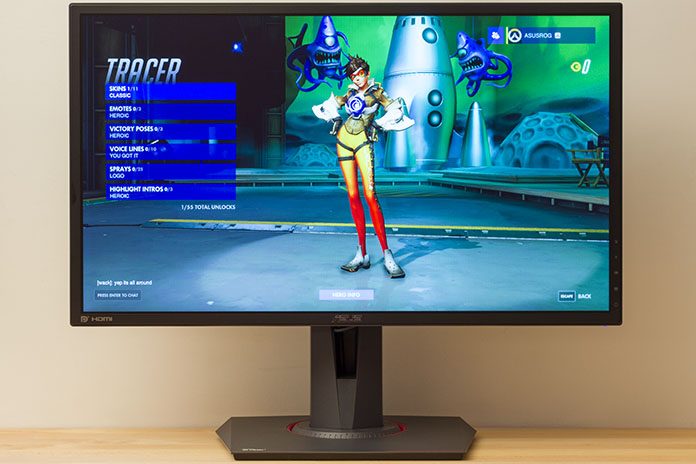 PC gamers have a history of scoffing at “cinematic” console frame rates. We’re not just boasting for the sake of it; the typical PC target of 60 frames per second feels smoother and more engaging than the 30 FPS consoles often struggle to maintain. But it doesn’t end there. The new ASUS MG248Q gaming monitor goes all the way up to 144Hz—or 144 FPS—and then intelligently varies the refresh rate with Adaptive-Sync.

144Hz monitors with variable refresh technology are nothing new. However, they usually live at the high end of the market, beyond the reach of most gamers. The MG248Q sells for only $299.99, letting everyone enjoy the improved gameplay and competitive advantage that a smarter, faster refresh rate provides.

Immersion is mentioned far too often in gaming discussions, but the buzzword applies here, because the refresh rate acts like a filter between you and the game. It affects your perception of motion within the world and how quickly your actions are reflected on the display. At 30Hz, you have to wait an agonizing 33.3 milliseconds between update cycles, exactly twice the time required at 60Hz. Cranking the refresh rate up to 144Hz slashes the wait time to a mere 6.9 ms.

The difference is absolutely noticeable.

For me, the benefits are most obvious in fast-paced shooters like Counter-Strike and Overwatch, where you’re moving quickly with players darting and shooting all around. As long as the rest of your rig can keep up, higher refresh rates impart a silkiness to the animation and movement that makes the experience much more lifelike. They also make input feel more responsive, further strengthening your connection to the game. If you’ve got the requisite skills and reaction time to capitalize, higher refresh rates can even convey a competitive advantage. Seeing the battlefield unfold a moment before your opponents gives you the best chance to outmaneuver them.

The ideal way to experience high refresh rates is to actually play games on a monitor that supports them. Since we can’t facilitate that over the web, you’ll have to make do with high-speed video instead. Check out the following snippet from a match between Cloud9.CS and Ninjas in Pyjamas. We filmed the MG248Q running at 60Hz and 144Hz using a camera capturing at 240 FPS. The footage plays back slower than real time, which nicely highlights the difference between the two refresh rates.

Despite the camera’s limited resolution at this speed, the 60Hz footage is clearly stilted and jerky compared to the 144Hz clip. The difference is smoothness is especially apparent during rapid mouse movements, like when the player checks their six in the first few seconds.

Driving games also have a lot to gain. While the view doesn’t change as dramatically as in shooters, the relentless forward motion and fast-moving opponents are perfect for higher refresh rates. Project Cars feels much more visceral at 144Hz, like I’m being sucked down the road as the world blurs around me. To the high-speed footage!

It’s really no surprise that 60Hz is too slow to keep with GT3 race cars. The high-refresh footage looks much smoother everywhere—especially in traffic through the corners.

Playing 240-FPS video slowed down like this somewhat exaggerates the effect, but what you see is still true to the experience. Games look and feel much smoother at 144Hz than they do at 60Hz.

To be fair, our test rig didn’t maintain a solid 144 FPS in Project Cars even with the details scaled way back. You can see performance drop in the real-time GamePlus overlay in the upper left corner of the display. If the refresh cycle begins and the graphics card doesn’t have a new frame ready, a fixed-rate display does one of two things. When Vsync is enabled, it redraws an old frame and waits until the next cycle to display a new one, which disrupts fluidity and introduces input lag. When Vsync is turned off, it cuts over to new frames as the graphics card spits them out, resulting in visible tearing when transitions happen mid-way through the refresh cycle.

Neither Vsync option is particularly appealing, but AMD’s FreeSync tech is much better. Based on the Adaptive-Sync component of the DisplayPort standard, it allows the MG248Q to vary the refresh rate to match the graphics card’s frame rate. The resulting synchronization gives gamers the best of both worlds: reduced stuttering and input lag without ugly tearing artifacts.

Even if you have a potent GPU, performance varies quite a bit from game to game, scene to scene, and frame to frame. Here are some examples running at the MG248Q’s 1080p native resolution on our Strix R9 390 graphics card. We gathered individual frame times from 60-second sections of each game and then converted the data to FPS for easy digestion. Click the buttons below the graph to switch between games.

CS:GO practically runs on a toaster, which is why frame rates soar over 300 FPS on the Strix, requiring a different scale than the other games. Rocket League fares nearly as well, though it frequently dips below 140 FPS with all the details turned up. There’s less frame-to-frame variance in the other games, where performance is much lower overall. Overwatch with epic details mostly hovers between 80 and 100 FPS, while Project Cars and The Witcher 3 with high details drift closer to 60 FPS.

Adaptive-Sync is especially helpful at lower frame rates, where the penalty for missing a fixed refresh cycle is longer. (Learn more in our look at G-Sync on the ROG Swift PG27AQ gaming monitor.) The MG248Q scales refresh rates from its 144Hz peak down to 40Hz, which is about as low as you’d want to go for games. This wide dynamic range lets the monitor adapt to any game and preference, whether you’re pushing performance for competitive play or turning up the graphics quality to maximize eye candy.

The MG248Q’s 1080p resolution means that even relatively modest GPUs can pump out frames fast enough to exploit higher refresh rates. AMD’s upcoming Radeon RX 480 graphics card should perform better than the Strix R9 390 we used, and it’s slated to start at only $200. There’s just one important caveat: while any graphics card can run the MG248Q at a 144Hz fixed refresh rate, a recent Radeon is required for variable refresh.

In addition to being a good match for high-FPS gaming, the 1080p resolution nicely fits the 24” screen size. The pixels are packed tightly enough to produce crisp text and sharp images whether you’re surfing the web, watching movies, or playing games. The colors look fantastic, too—much better than you’d expect from a TN monitor.

The main benefit to TN technology is quicker response times. The pixels transition from gray to gray in just one millisecond, a quarter the time required by typical IPS tech. This reduces ghosting, the faintly visible remnants of a pixel’s former state. Ghosting is usually noticeable with fast motion, so minimizing is good for the same kinds of games that are well-suited to high refresh rates. You can see it in high-speed glory on TN and IPS displays in our comparison of the MG24UQ and MG28UQ 4K gaming monitors.

TN viewing angles aren’t quite as wide as the IPS alternatives, but that only matters if you’re looking at the screen from off-center angles. Most gamers sit right in front, where there’s no color shift at all. The MG248Q’s fully adjustable stand makes it easy to dial in the perfect position and change it quickly to suit different users. You get 5.1” of height adjustment, 38° of tilt, 180° of swivel, and the ability to pivot to a portrait orientation in either direction. The stand is also removable, so the display easily mates with VESA-compatible arms.

Video inputs include DisplayPort 1.2, HDMI 1.4, and dual-link DVI. You can connect the MG248Q to a gaming PC and console and still have an input to spare. There’s also an analog audio input for the integrated 2W speakers, plus a headphone jack that takes input from DisplayPort and HDMI feeds.

All the physical controls are tucked around the right edge to minimize the width of the bezels. The red joystick makes navigating the on-screen menus fast and intuitive, while dedicated buttons offer shortcuts for input switching and activating GamePlus overlays. Along with the real-time performance counter seen in the high-speed footage, GamePlus offers a customizable crosshair for games that lack one, guides for aligning multi-display arrays, and timers for tracking in-game events.

If you don’t want to tweak the display with the on-screen menus, our DisplayWidget utility brings similar functionality to Windows. Pretty much everything about the display can be adjusted with a few mouse clicks. That includes the characteristics of GameVisual profiles that change the output for different scenarios, like brightening shadows to make enemies easier to spot and boosting colors to make scenery more striking. Once a profile is dialed in, you can save it and share with others. You can also tie it to specific applications using AppSync, which automatically switches modes to ensure the display is always using your preferred profile for the task at hand.

DisplayWidget provides handy shortcuts for accessing the MG248Q’s low-blue-light modes, which cut harmful emissions that can damage your eyes. Reducing blue light exposure can also make it easier to fall asleep after staying up way too late playing “just one more level.” While the filters are activated manually, the flicker-free backlight is on all the time. It reduces eye strain eye strain, so you can game longer with less fatigue. The flicker-free backlight and blue light filter are both certified by TÜV Rheinland, the world’s leading authority on display testing. You can learn more about these ASUS Eye Care features in this Edge Up article.

Extras like Eye Care, DisplayWidget, and the awesome stand and OSD controls set the MG248Q apart from other contenders in this space. They round out the overall package with useful features that make the monitor easier to live with day to day, but the real appeal is the marriage of a 144Hz panel with Adaptive-Sync mojo. Gaming at high refresh rates is simply relevatory, as is seeing variable refresh technology in action. After being thoroughly spoiled by that combo, playing at a fixed 60Hz feels kind of meh, not unlike going from 60 FPS on a PC to 30 FPS on a console.

The MG248Q really does take PC gaming to another level. It’s fast enough to keep up with competitive players and smart enough to improve the experience for everyone. And, at $299.99 online, it’s an upgrade most of us can easily afford.