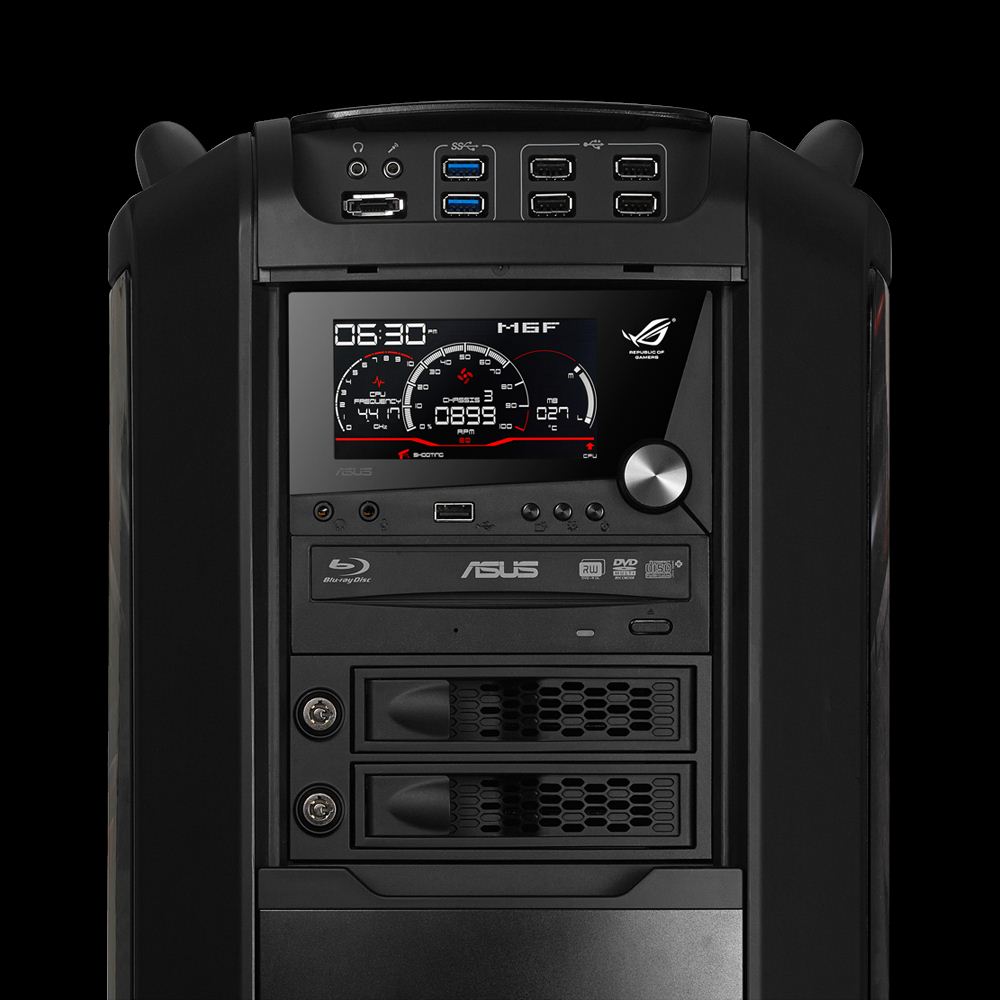 ASUS and ROG have long had a history of innovative accessories focused on monitoring, performance tuning and advanced hardware based control functionality. ROG has especially focused on the development of a number of accessories extending the functionality and features of a motherboard outside of the chassis and into the hands of enthusiasts. Whether it be the original LCD Poster or the OC Key or the OC Panel introduced with ROG Z87 motherboards, innovation for these types of accessories has shown to be a staple of ASUS motherboards . Based on the feedback of enthusiasts the ROG team has been busy designing and developing a new motherboard accessory that squarely puts the focus on PC enthusiasts and PC gamers. While the OC Panel currently offers a great balance of features and functionality that complement both enthusiasts and overclockers. The Front Base takes on the feedback of the community and looks to one up the OC Panel in a number of ways.

So what separates the Front Base from the OC Panel? First and foremost the Front Base was designed to be used exclusively in a 5.25 bay along with being targeted at PC enthusiasts and PC gamers. The OC panel was designed and developed for overclockers, tweakers & tuners as well as PC enthuiasts. The OC Panel from a from standpoint was designed to be used in a hand held fashion or via integrated kickstand. One great aspect though of the OC Panel was its ability to adapt to the needs and ants of the PC enthusiast by support mounting into a 5.25 with different functionality via the use of a5.25 bay adapter. With all this mind there were a number of improvements the ROG team wanted to integrate and implement for the Front Base. First was to implement a more immersive and detailed display, allowing not only a visual upgrade to the front of your chassis but improve the usability and readability of the screen. In this respect the Front Base considerably improves upon the OC Panel in that it offers a 4 inch LCD display. The display offers a clean but stylized view of information relevant to enthusiasts such as CPU temperature, fan speeds and CPU frequency and more. It is able to provide this information by directly interfacing with the motherboard via a direct hardware based connection. In this way the Front Base is the same as the OC Panel in offering hardware base monitoring along with hardware based adjustment ability.

This direct hardware control implementation allows for extensive fan control functionality at your finger tips. Whether it be adjusting the CPU fan speed or chassis fan speed the Front Base can take advantage of the advanced per header fan control offered on ASUS ROG series motherboards. Outside of offering a great deal of monitoring and fan control functionality the Front Base eliminates an issue that has plagued PC gamers for a very long time. What might that be…. front audio connection quality and front audio connection interference. Taking a step back from the Front Base these issues were part of the rational behind the design, development and implementation of the isolated “red line” audio design that is part of SupremeFX audio on ROG motherboards. While considerably improving the quality and performance of integrated audio there was still another “kink in the chain” impacting the audio experience. The remaining culprit?  The front audio cable within the chassis, this cable can be of varying quality and generally offers no shielding. At the end of the audio output chain this cable can impact the overall sound quality experience considerably. Many gamers have experienced the “interference” that can be picked up on this cable. This type of interference can also reduce the db performance and stereo imaging as stereo signals are also generally mixed into a single cable. Overall it is apparent that to ensure a great front headphone experience you need not only a good sound design but good connection quality free of interference and the associated humming or line noise that can impact your listening experience.

In this respect the Front Base resolves the issue by including a front HP ( headphone ) output along with front microphone input. These connections are fed by a thick high quality shielded front audio cable that also improves signal performance by separating left and rights channel to their own cables. This not only improves overall signal performance but helps to create superior stereo imaging. By bypassing the internal chassis front audio cable users can ensure a superior headphone experience whether it be in music , movies or games. In internal analysis the Front Base high quality connection even increased db output performance compared to integrated front audio cables. Toping it all off the Front Base also allows for quick adjustment to your volume via the adjustment / selection knob. For users of discrete sound cards like our Xonar series fear not the AAFP front headphone connection on Xonar and other discrete sound card is fully compatible with the Front Base as well.

Below you can see some photos of the front HP / headphone output n and the front microphone input. In addition you can see a comparison of the Front Base AAFP cable compared to a normal cable found in a chassis.

In addition to the previously mention functionality the Front Base also will offer quick EQ profiles.

Continuing on with features and functionality the Front Base offers up one touch overclocking. With the touch of the OC button, gamers can increase clock speeds and overall system performance. Enthusiast overclockers can even customize their overclock and link it to the button by saving a profile in the UEFI. Additionally gamers looking for a easy way to exit out a game now have a handy escape button that does just that. Depressing the escape button minimizes your active game window and leaves back at your desktop. Rounding out the feature list is a nice addition in USB quick charging. The Front Base offers users an easy to access front USB 2.0 port that has its own power line enabling users to quickly and easy power or charge their smartphones, tablets or other usb powered devices. This charging can occur whether the system is in sleep or hibernation or even powered off.

Below is a example of the two stage one touch overclocking offered by the Front Base. You can also reference how easy it is to install and connect the Front Base.

That wraps up a quick preview and rundown on the upcoming Front Base. Stay tuned to ASUS PCDIY for more information as its release date approaches.

1. What motherboards does the Front Base support?

2. Can I use the front audio connection with a sound card as opposed to integrated motherboard audio?

Yes the front audio header a universal standard and is present on many discrete sound cards such as the Xonar sound cards.

3. The cable looks short this is not ideal for cable routing?

We are aware of the wait and need to have a longer cable for optimal cable routing. We are currently evaluating and verifying how extended lengths will impact the performance of the higher quality cable. As long as performance is not impact the cable will be extended in the final production version.