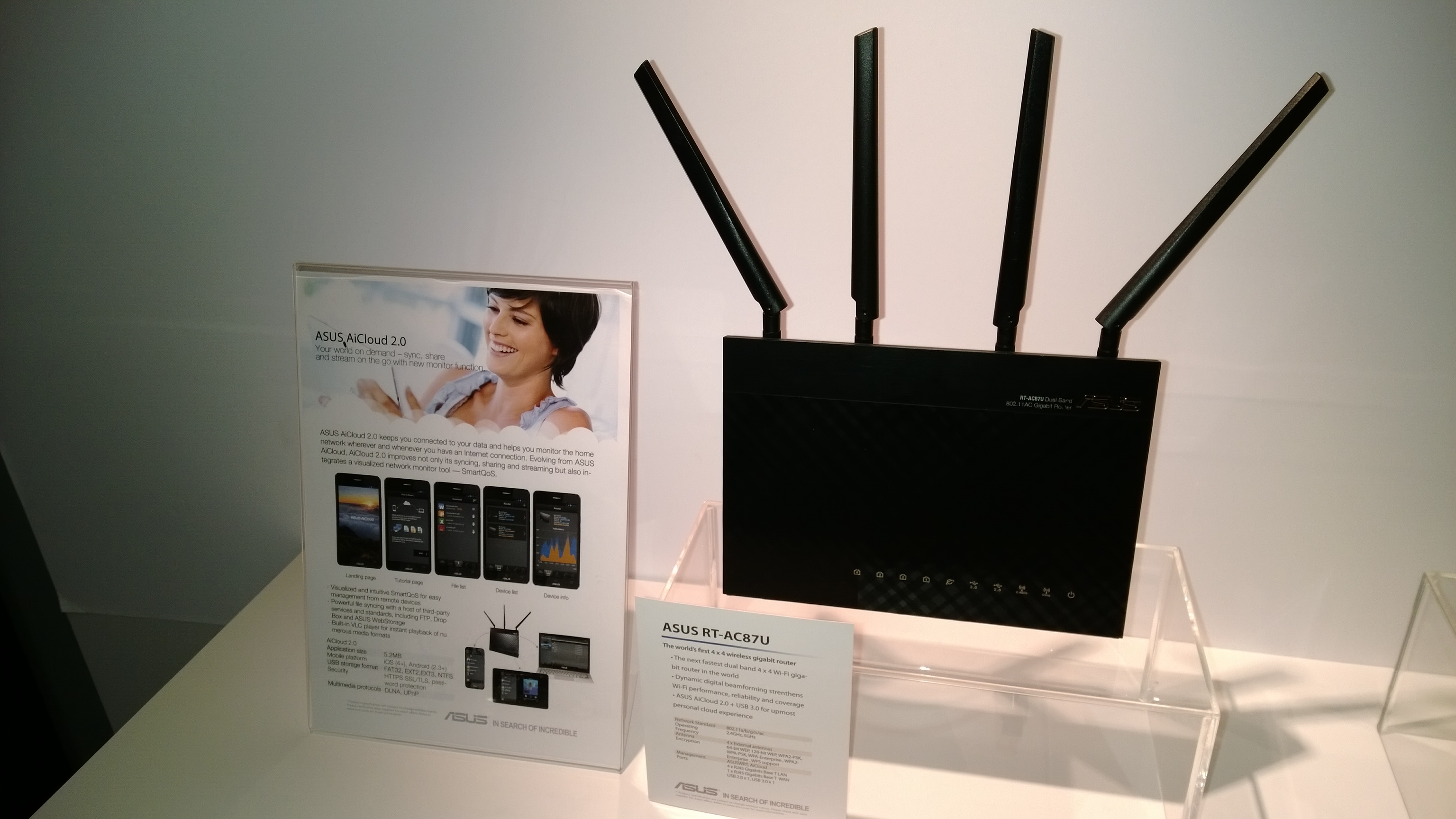 For those of you out there interested in the fastest wireless router ASUS’ division is going to have you covered. Currently the go to router for ultra fast 802.11AC performance is the RT-AC68U. The RT-AC68U is a 3×3 router that offers real-wold throughput that is significantly faster than 10/100 wired ethernet while offering truly impressive concurrent performance and extensive range. For those of you that have been waiting for the throughput increase and latency reduction to be enough for great gaming, streaming and wireless backups or transfers the wait is over. Enter in the router to rule them all and take on the mantle of the best wireless router on the market.

The RT-AC87U is still under design and development but we are already aware of some of the new features of this new router. It features a next generation wave 2 802.11AC chipset. The AC87U is powered by Quantenna’s latest and highest performing 4×4 MU-MIMO chipset. in addition to being the first 4×4 802.11AC chipset it also supports advanced beam forming to further improve on range and connectivity with beam forming supported wireless adapters. While the hardware is important the firmware is equally important. The RT-AC87U will continue the trend of featuring tuned firmware and an optimized radio design that will allow the RT-AC87U to be the best WI-FI – wireless router ASUS has ever released. Users looking for robust concurrent connectivity whether it be WAN, LAN, WI-FI or USB or all them will realize the value in the performance and functionality afforded by the AC87U. Built from the ground up for users looking for the absolute best in range, throughput and overall performance especially concurrent performance will find that the AC87U checks off all the right boxes and enables a level of wireless performance that mirrors hard line connectivity. In addition users looking for NAS type functionality will enjoy improvements in performance to USB speeds as well.

Connected enthusiasts with a multitude of WI-FI devices looking to maintain fast but stable connectivity will truly appreciate the performance they can experience on the latest dual band and 802.11AC enabled smartphones, tablets, laptops, HDTV’s, consoles or PC’s. Networking enthusiasts that realize the needs of extensive whole home device connectivity can now keep all their devices connected seamlessly and easily and with confidence in the range and throughput created by the RT-AC87U. To top it off users will have a great deal of functionality, flexibility available via the intuitive controls offered by the ASUS WRT web based interface allowing for scheduling, prioritization, monitoring and much more.

In addition to offering outstanding performance the AC87U will introduce extensive new improvements to the ASUS WRT firmware. For users looking for new features and functionality from ASUS and its Ai Cloud software as well as ASUS WRT firmware stay tuned. Considerable time and effort has and continues to be put into the improvement and enhancement to the firmware’s functionality and feature set. Users who appreciate the application free nature of ASUS firmware will continue to be impressed at the ability to setup, log in, control and do much more via the simplicity of a web based interface.

Below you can check out some of the pictures of the prototype of the RT-AC87U. Stay tuned to PCDIY for more information on ASUS line of networking products.

The ProArt Studiobook 16 family empowers creative professionals with vivid OLED panels and the...

News Eric Born - September 2, 2021
Next-gen OLED displays are a clear choice for creators. These panels produce color that’s more saturated than ever and highly accurate all at once,...

News Eric Born - September 2, 2021
In years past, a laptop that could browse the internet and run office apps may have been sufficient for the needs of the average...