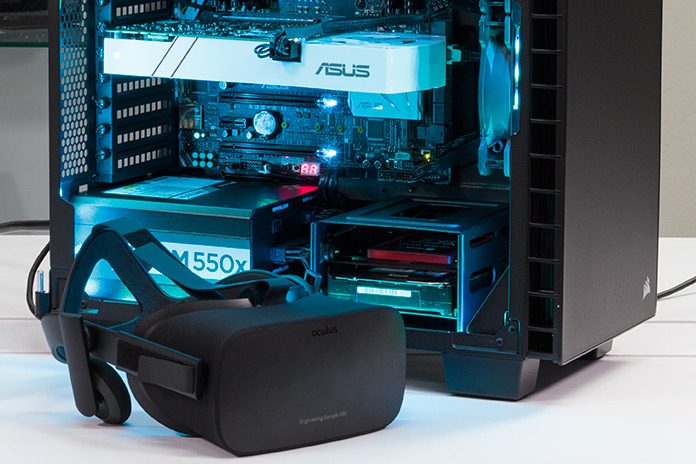 Virtual reality is the next big thing on the PC, and we’ve spent a lot of time immersed in it recently. It’s hard not to put in extra hours “testing” when you have access to the latest VR headsets, cutting-edge PC components, and complete systems. And all that time has been well spent, because we’ve learned some valuable lessons about the experience—and what it takes to have a good one.

1. Bring all the graphics power you can

Keeping up with the 90Hz refresh rate of modern VR headsets requires serious graphics power. The recommended specs for the Oculus Rift and HTC Vive call for at least a GeForce GTX 970 or Radeon R9 290, and that’s really the minimum. As we found in our look at VR performance with modern graphics cards, there’s a lot to be gained by stepping up to newer and higher-end cards. The GeForce GTX 1060 is our pick for the best value, while the GTX 1070 arguably sits in the sweet spot, with a noticeably smoother experience that won’t break the bank.

Stepping up to the GTX 1080 makes the experience smoother still, especially in games with rapid movements that expose weaknesses in the asynchronous timewarp and repositioning techniques used to compensate for dips in performance. Those frame-fudging algorithms generally work well, but if you can afford a GPU powerful enough to avoid them, we think it’s worth splurging.

2. Your CPU is probably fast enough

We’ve done some experimenting to see how clock speeds and the number of CPU cores affect the VR experience, and there’s little to report. The minimum CPU recommendation of a Core i5-4590 or better is prudent, and more powerful CPUs don’t necessarily translate to tangible gains. Even Intel’s latest 10-core Broadwell-E monster performs about the same as quad-core chips, and you can scale back to just two cores in some games without suffering ill effects. The bottleneck with modern PCs is overwhelmingly graphics performance.

3. The Oculus Rift and HTC Vive are both awesome

Fanboys can debate which is better, but as far as I’m concerned, the Oculus Rift and HTC Vive are both awesome. Beyond key similarities like the displays and hardware requirements, they’re also quite different. The Rift is lighter and more comfortable to wear, especially for longer sessions. Its integrated headphones are surprisingly good, and they make it easier to put on the headset. To my eyes, the Rift’s lenses also produce a sharper picture, without some of the reflected glow sometimes visible on the Vive.

Although the Rift is also the cheaper of the two leading contenders, its motion controllers and room-scale experience aren’t ready yet. Both are available today with the Vive, enabling a much deeper sense of presence in virtual reality. Honestly, it’s almost like a whole other class of experience. The option to use your own headphones is great, especially for blocking out external sound. And the goggles are a better fit for my face, cutting out some of the light that leaks in with the Rift.

We may need to revisit this comparison when the two headsets can go head-to-head with room-scale VR. Which will of course require extensive testing. Ahem.

When you’re immersed in VR, it’s easy to forget the experience is tethered by a digital umbilical cord. I’ve found myself effectively tied to a swivel chair after sessions with the Rift, and I’ve nearly tripped a few times in room-scale VR with the Vive. No wonder people are experimenting with suspended cable hangers and self-contained VR backpacks.

5. You can take VR on the road

Before NVIDIA’s latest Pascal-based graphics chips came along, finding a notebook fast enough for VR was a challenge. But the new GPUs bring VR-ready performance to a much broader range of systems, from brawny desktop replacements like the ROG G752VS OC Edition to leaner laptops like the Strix GL502VM. Get the lowdown on our full lineup of notebooks with Pascal graphics in this Edge Up article.

6. Prepare for a workout

The additional immersion provided by room-scale VR or just the Vive’s handheld motion controllers has a cost: physical exertion. It takes a lot more energy to stand, walk around, and move your arms than it does to sit with a gamepad or keyboard and mouse. Games with lots of dynamic movement, like Raw Data and Audio Shield, can be challenging enough to work up a sweat. Even with the Rift, the tendency to look up, down, and all around will give your neck muscles a workout.

Some VR games are intense enough to induce fatigue without a lot of motion. Hot laps in Project Cars and hectic dogfights in Elite Dangerous can be tiring even with a gamepad, at least when compared to playing on a traditional monitor. The heart-pumping action is definitely worth it, so I’m not complaining.

7. It’s getting hot in here

Even if you’re not flailing around fighting enemy hordes, VR can get toasty. The headsets put a couple of screens right in front of your face, and they tend to warm up over time. While there isn’t enough heat to make the experience uncomfortable for me, removing the headsets after longer sessions feels a bit like sticking my face into the freezer after a day out in the sun.

The first time I emerged from VR at home, I found our dog sitting in front of me with a concerned look on his face. I’d been thoroughly engrossed for over an hour and have no idea how long he was sitting there, wondering about this new contraption strapped to my face. He quickly got used to my attention being monopolized and barely showed interest when I eventually moved to a room-scale setup. My mother-in-law’s dog lacked that early exposure and almost tackled me when she interpreted 3D painting in Tilt Brush as an invitation to wrestle. Your experience may vary.

As cool as VR looks from the inside, you’re going to look kind of silly to everyone on the outside. First there’s the infamous gaping mouth—a slack-jawed look of bewilderment especially apparent among VR virgins. But that’s nothing compared to what you look like playing some motion-controlled games. I can hear my wife snickering in the background as I gun down targets in Space Pirate Trainer, and she’s threatened to record embarrassing videos for future blackmail.