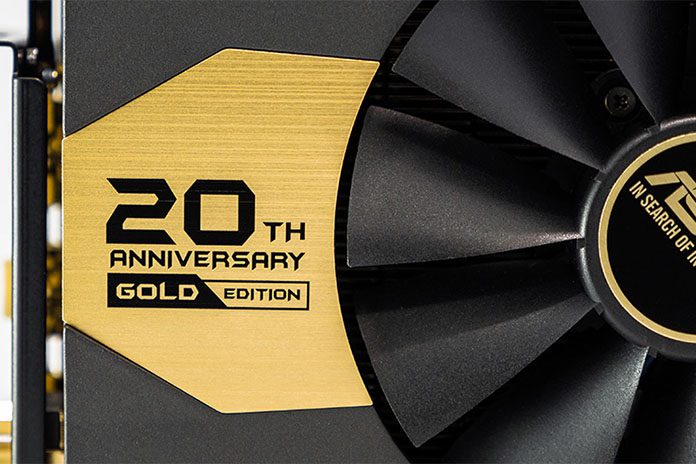 ASUS has been producing graphics cards for 20 years, a milestone we’re proud to honor with the 20th Anniversary Gold Edition 980 Ti. This occasion recognizes more than just the mere passage of time; it’s a celebration of our relentless drive to raise the bar. We’ve spent the last two decades pushing the limits of performance and developing innovative features that move the industry forward. The 20th Anniversary Gold Edition embodies those efforts as our finest and most exclusive GeForce GTX 980 Ti.

Looking back, ASUS’ history is littered with examples of industry leadership. We recognized early that cooling is critical to graphics performance, which led us to be the first to integrate a fan for the GPU. We continued along that path with the first cards to feature dual fans, direct-contact copper heatpipes, and hybrid coolers that combine liquid and air. Keenly aware of how cooling affects system noise, we also developed 0dB fans that spin down to complete silence under lighter loads. Those fans appear in the Gold Edition’s DirectCU II cooler, whose heatpipes snake across the surface of the GPU like the exhaust pipes of a silicon engine.

Cutting-edge cooling helps the 20th Anniversary Gold Edition GTX 980 Ti reach new performance heights, but that’s not the only factor. We carefully screen GPUs and reserve only the very best for this card. Less than 10% make the grade, which is why we can clock the Gold Edition at an astounding 1266MHz base and 1367MHz boost, the highest frequencies of any GeForce GTX 980 Ti. The turbo-charged clocks are good for more than just bragging rights—they also make gameplay much smoother. Compared to the stock 980 Ti, the Gold Edition increases frame rates by 22% in Grand Theft Auto V and 21% in The Witcher 3.

And we encourage you to pursue even higher performance with overclocking.  Since the early days, ASUS graphics cards have led the way with tweaking options that make it easier to realize the GPU’s full potential. Our SmartDoctor utility was the first to let users control graphics performance with software, and its spirit lives on in GPU Tweak, which puts the Gold Edition’s clock speeds, voltages, and fan controls at your fingertips.  For truly extreme overclocking, our exclusive defroster instantly removes build-up around the memory chips to improve stability at sub-zero temperatures. Go too far, and Safe Mode lets you restore the default frequencies and voltages with the touch of a button.

Our pioneering spirit manifests in the Gold Edition’s appearance. The black PCBs that are so common today were first introduced to graphics cards by our V8200 Deluxe. That card also featured a gold heatsink, whose spirit lives on in the 980 Ti’s accents.

With another ASUS innovation, the 20th Anniversary Gold Edition GTX 980 Ti displays the graphics load using a multicolored logo on the top edge. You can see how hard the GPU is working at a glance and also tell when the card is operating in Safe Mode.

Even the manufacturing process responsible for building the card is a testament to ASUS’ leadership. Our Auto-Extreme Technology is the first completely automated production process in the graphics card industry. It lays out the Gold Edition’s high-end components with unmatched mechanical precision, while fluxless soldering minimizes the build-up of dust and oxidation over time.

A premium card with proven pedigree, the 20th Anniversary Gold Edition is the pinnacle of the GTX 980 Ti. Only a limited number will be available for $799. Stay tuned for news on where you can find them—and how you can win one free of charge. In the meantime, be sure to check out the progress on Golden Age, a custom build from modder Hassan Alaw featuring dual 20th Anniversary 980 Tis and ROG’s Maximus VIII Formula motherboard. You can follow the build log on the Overclock.net forums.