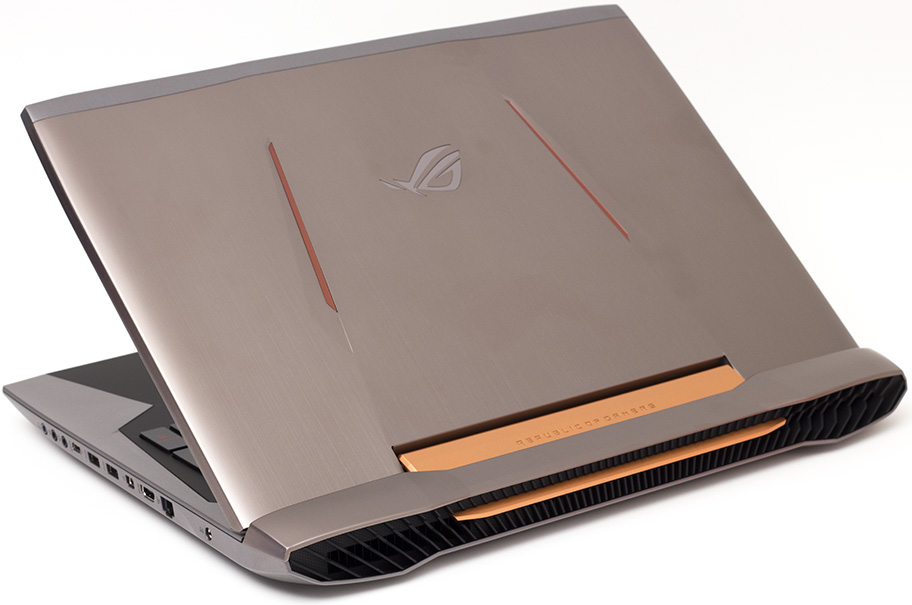 ROG’s G752 gaming laptop is an absolute beast right out of the box.  With Intel’s 6th Generation Core i7 processors alongside Maxwell-based Nvidia GeForce graphics, it has enough horsepower to play the latest games with all the details turned up.  On top of that, G-Sync technology links the frame rate of the GPU to the refresh rate of the display, which smooths out stuttering, reduces input lag, and eliminates tearing.

Cutting-edge DDR4 memory and M.2 storage can also be found under the hood.  Unlike the CPU and GPU, which are buried deep inside the chassis and inaccessible to end users, some of the G752’s memory slots and storage bays are readily available through a removable panel in the bottom.  Upgrading the memory and storage requires little more than a Phillips screwdriver.

To gain access, simply peel back the rubber cover on the G752’s underbelly and loosen the screw underneath.  You don’t even have to negotiate an ominous “warranty void if removed” sticker.  As long as the system isn’t damaged, the memory and storage can be upgraded without affecting the warranty.  The only catch is that the original configuration must be restored if the laptop has to be returned to for servicing.

With the retention screw loose, the bottom panel pops off to reveal the memory and storage bays:

From here, you can access two of the four memory slots.  We leave these slots empty in the G752VL-DH71, G752VT-DH72, and G752VY-DH72 to make it easy for upgraders to add their own memory.

The G752 supports DDR4-2133 SO-DIMMs with up to 16GB per stick.  Depending on the model, you can expand the total memory to a whopping 64GB, which is more than what’s found in most gaming desktops.

The M.2 storage lies to the south, under a metal cover held in place by four more screws.  There are two slots, each with a dedicated PCI Express 3.0 x4 connection that can keep up with the fastest SSDs on the market.  With support for speeds up to 32Gb/s, just one of these slots has more than five times the bandwidth of Serial ATA.  The performance improvement is noticeable even with a relatively basic task like copying large files.

As the silk-screened label indicates, M.2 compatibility is limited to PCI Express SSDs.  PCIe drives come in one of two flavors—AHCI or NVM Express—and the G752 works with both of them.  However, it doesn’t support M.2 drives based on the Serial ATA standard.  Those drives are too slow to take advantage of the copious bandwidth on tap, so there’s little point to running them in a laptop like this.

The G752 currently treats M.2 SSDs as independent drives.  In the coming weeks, however, UEFI updates will add the ability to pair drives in a RAID 0 array.  Otherwise known as striping, this RAID configuration splits the data for a single volume between two drives.  These drives are accessed in parallel, which improves performance, and their capacity is combined, which lets you neatly consolidate games and applications in a single, massive volume.

SSDs are ideally suited to hosting your operating system, games, and applications.  Even when there’s only one them, their lightning-fast transfer rates and near-instantaneous access times make the entire system feel more responsive overall.  But SSDs aren’t necessarily the best location for all your data.  Media archives, downloads, and other miscellaneous files that don’t require quick access are best confined to mechanical storage, which provides copious capacity at a much lower cost.  The G752 offers the best of both worlds by complementing its M.2 slots with a standard 2.5” hard-drive bay.

Like the M.2 slots, the HDD bay is readily accessible through the bottom panel.  Loosen a few more screws, tug on the protruding tab, and the whole cage pops out to reveal the hard drive.  Within minutes, you can replace the stock unit with another mechanical drive.  Or, if you want to go all out, you can swap in a 2.5” Serial ATA SSD instead.

Whether you take advantage immediately or down the road, the G752’s upgradeable memory and storage let you easily make the machine even more formidable—and uniquely your own.