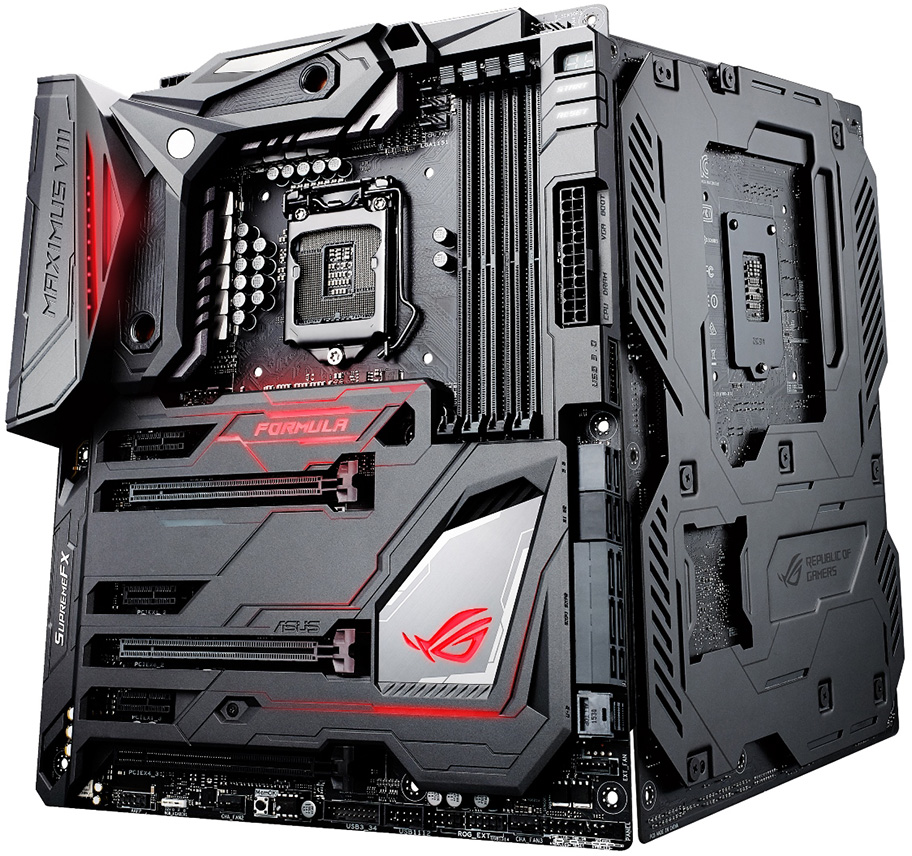 Every motherboard has its own formula. This carefully balanced equation of specs and silicon lays the foundation on which PCs are built, ultimately dictating much of their personality.

Although each blueprint is unique, most follow familiar themes and conventional thinking, making it difficult to stand out from the crowd. The ROG Maximus VIII Formula is different, though. Based on Intel’s Z170 chipset for 6th Generation Core processors, it brings together exclusive features and compelling new capabilities to redefine the math for premium gaming PCs. With cooling, lighting, and looks like no other, plus all the cutting-edge technologies you’d expect from ASUS’ Republic of Gamers, the Maximus VIII Formula has all the right ingredients for your dream build.

Custom liquid cooling loops offer unmatched performance and flexibility, so we made the Maximus VIII Formula compatible with them right out of the box. The board’s all-digital power regulation circuitry is covered by a CrossChill EK cooler created in collaboration with the experts at EK Water Blocks. Designed specifically for the Formula, this bespoke block lowers MOSFET temperatures by up to 23°C to ensure impeccably stable power delivery with extreme overclocks and punishing workloads.

Coolant flows through a highly conductive copper channel capped by standard G1/4” fittings, making the CrossChill EK compatible with common liquid cooling components. You can hook it up to existing loops without reworking all the plumbing. The block also has sufficient surface area to dissipate heat with air-cooled setups, making it suitable for any system.

To match the rising tide of RGB-illuminated gaming gear, the Maximus VIII Formula combines extensive onboard lighting with support for off-the-shelf LED strips. The PCB is populated with 28 individual LEDs capable of bathing the board in millions of colors. Those who desire additional illumination can plug a 4-pin/12V LED strip right into the board—or into the included extension cable, which makes it easy to position auxiliary lighting for maximum impact.

The onboard lighting and LED header are controlled by intuitive Aura software that’s loaded with customization options. Whether you want to select specific colors to complement your rig’s aesthetic or cycle through the spectrum, Aura puts the entire rainbow at your fingertips. The lighting can strobe and breathe with a steady rhythm or pulse to the beat of music and games. In a functional twist, it can even change color to reflect the CPU temperature, providing valuable information at a glance.

Preferences vary, so Aura makes it easy to tweak colors, effects, and intensities for a subtle glow or blinding show. You can assign different combinations to the onboard and auxiliary lighting or synchronize them in perfect harmony.

The integrated LEDs are strategically placed to accent the ROG Armor blanketing much of the board. Adorned with laser-etched detailing, this sleek shroud sets the Maximus VIII Formula apart even with the lights turned off. It deflects the heat produced by graphics cards and shields surface-mounted components from the physical damage that can be caused by slipped screwdrivers and other installation mishaps.

Around back, the Formula is reinforced by a plate of cold-rolled steel that prevents the PCB from warping under the weight of monster CPU coolers and other heavy equipment. The backplate sits on thermal pads that draw heat away from hot spots to help your system run cooler. It’s also electro-galvanized to keep corrosion at bay.

With a U.2 port and M.2 slot, the Maximus VIII Formula is ready for all the latest PCI Express SSDs. Those interfaces are linked to four PCIe 3.0 lanes, giving them access to a staggering 32Gbps of bandwidth—more than a 5X increase over Serial ATA. Factor in support for the NVM Express protocol, which dramatically reduces overhead, and the performance implications are profound.

There’s plenty of bandwidth for external devices, too. Support for USB 3.1 Gen 2 lets the Formula transfer files at twice the speed of USB 3.0. The next-gen standard is served in two flavors: an old-school Type-A port that’s compatible with existing hardware and a reversible Type-C port that ensures future devices won’t be plugged in the wrong way.

Thanks to SupremeFX 2015 audio, the Maximus VIII Formula sounds every bit as good as it looks. This latest iteration of ROG’s integrated audio uses an ESS Sabre DAC with a dedicated clock, de-pop relay, and other premium components to fully realize the acoustic potential of your favorite music, movies, and games. The headphone amp is particularly slick; it’s not only capable of pumping up to 2V RMS into headphones from 32-600Ω, but also intelligent enough to detect the headphone impedance and set the ideal gain automatically. ASUS software further enhances the experience, with virtualized surround sound for stereo headsets and enhanced recording quality for voice chat and casting.

All the networking bases are covered. On the wired front, an Intel Gigabit Ethernet controller combines high throughput, low latency, and minimal CPU utilization to deliver optimal performance for multiplayer gaming. Wireless connections are handled by a dual-band 802.11ac adapter with MU-MIMO support and a 2×2 external antenna. The wireless module also supports Bluetooth 4.1, providing easy connectivity for peripherals, smartphones, and other gear.

Having the baddest board on the block isn’t much good if it’s awkward to use, which is why we put so much effort into our overclocking, tweaking, and cooling interfaces. Tuning the Maximus VIII Formula is a breeze whether you’re using our critically acclaimed UEFI or industry-leading software. Seasoned overclockers and enthusiasts can access a veritable mountain of manual controls, while inexperienced newbies can easily optimize their entire machine—from the CPU clock to the memory speed to the fan profiles—with a single click.

There’s a lot more to the Maximus VIII Formula than what’s covered here, so check out the product page for a full rundown of all the features and specifications. The board will be available soon for $399.