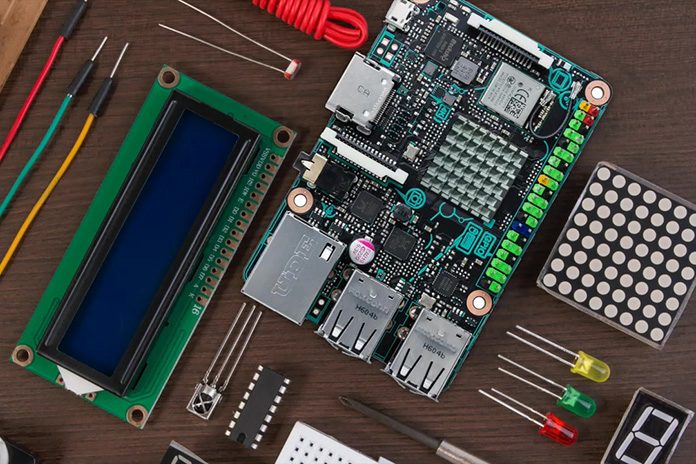 For decades, ASUS has been making components that let you build your own computer. The PC has changed immensely since we got our start in the business, but we remain committed to supporting DIYers who want to make things with their own hands. There’s something undeniably special about a machine you’ve put together yourself.

The DIY PC scene has branched in an interesting new direction in recent years. Inexpensive single-board computers move away from building PCs themselves and instead focused on making them the brains behind larger projects. These bite-sized computers can power everything from robots to media boxes to home automation, and they’re valuable educational tools for learning how computers, electronics, and code interact.

Excited by the possibilities in this new era of DIY, we created the Tinker Board. It has all the essentials you’d expect from a single-board computer, plus faster hardware and connectivity that lets you do more. It’s available now for only $54.99.

Single-board computers are necessarily limited by budget-friendly hardware that’s short on power compared to modern DIY PCs. There’s only so much we can squeeze onto an affordable board the size of a credit card. But we still wanted the Tinker Board to enable a broader range of projects than incumbents in this space, so we beefed up the specs to enhance performance in several important ways.

The Tinker Board uses Rockchip’s RK3288—the same SoC found in our Chromebook C201. The chip has quad ARM Cortex-A17 CPU cores clocked at 1.8GHz, plus integrated Mali-T764 graphics running at 600MHz. This tag team handily beats the CPU and graphics performance of the SoCs in other popular single-board computers. The extra horsepower opens the door to tasks that demand more processing power, like machine vision and PC-like applications. We include a small passive heatsink to keep the chip cool under pressure and in compact cases with minimal airflow.

The Rockchip processor can accelerate video decoding for both H.264 and H.265 content at resolutions up to 4K. This capability pairs nicely with the board’s HDMI 1.4 output, which lets you easily connect a monitor or big-screen TV to create a basic media station. The HDMI port can push 4K at up to 30Hz, but only full-screen video displays natively at that Ultra HD resolution. Due to a limitation of the SoC, 4K visuals created by OS desktop management systems have to be upscaled from 1080p.

The beefed-up processor boasts more than just extra processing grunt. It has a dual-channel memory controller hooked up to a generous 2GB of onboard DDR3 memory. Greater capacity and bandwidth are especially beneficial when the memory is shared by the CPU and GPU. Storage performance is also important. Rather than relying on a fixed allotment of integrated flash, the Tinker Board has a Micro SD slot that lets you add as much as you need. The slot is linked to the SoC with an SD 3.0 interface that provides faster access to data than typical single-board computers.

All the interfaces done the right way

Despite its diminutive size, the Tinker Board bristles with connectivity. Its four USB ports let you connect a keyboard and mouse alongside multiple complementary devices, like a thumb drive and webcam. Unlike with some of our competitors, the USB ports are on a separate bus than the integrated Gigabit Ethernet, allowing simultaneous use without sacrificing performance. This separation is an vital distinction given how frequently USB and networking are used together.

Gigabit Ethernet gives the Tinker Board ultra-fast wired networking, while onboard 802.11n Wi-Fi adds compatibility with ubiquitous wireless networks. The Wi-Fi is tied to an IPEX header compatible with standard antennas, making it easy to improve signal strength for projects that require a strong connection. Integrated Bluetooth 4.0 + EDR adds peripherals to the wireless picture, and a 3.5-mm jack provides a conduit for HD audio input and output.

The Tinker Board’s MIPI DSI interface is perfect for connecting a small display or touchscreen for car computers and similar projects. It supports resolutions up to 720p, as does the MIPI CSI interface for cameras. You can capture and display imagery and video without using any of the external ports.

Makers will be especially interested in the 40-pin GPIO header, which has plenty of pins for sensors, switches, motors, and other essential electronics. The pins are color-coded for convenience, a trick borrowed from PC motherboards, and most of the other onboard connectors are clearly labeled with icons. Just as we strive to simplify building and tweaking full-sized PCs, we want to make it easy for novices undertaking their first projects. We also want to make the Tinker Board as reliable as possible, which is why it offers protection from not only surges, soft starts, and excess current, but also over, under, and reverse voltages.

Power is provided through a Micro USB port. The requisite adapter isn’t included in the box, so we recommend picking a 5V/2.5A unit off the shelf. The Tinker Board is compatible with adapters that work with the Raspberry Pi, and it fits in many of the cases designed for that single-board computer. Check our QVL for recommended adapters and other accessories.

Optimized software brings it all together

It’s not enough to have good hardware. Single-board computers require solid software support, so we’ve developed our own Linux distribution. The Debian-based TinkerOS provides a good foundation for browsing the web, watching videos, coding scripts, and other basic tasks. We chose the LXDE desktop environment for its low resource requirements. Version 1.8 of the OS is based on the latest Debian 9 core. It includes an optimized Chromium web browser, Python and Scratch coding apps, and a media player we co-developed with Rockchip. The TinkerOS media player is currently required for hardware-accelerated 4K video playback.

Android is on the radar. The mobile-centric OS is particularly appealing for projects that involve touchscreens, and we’re working on a version based on Marshmallow. It’s currently in beta, with a full release due soon. We’re also working with the people behind Kodi media-center software, Volumino audiophile music player, and myDevices’ Cayenne IoT platform, among others.

Everything you need for DIY projects

The Tinker Board is an approachable entry into the world of single-board computers and DIY projects. It’s available now from Amazon and Micro Center for $54.99. Check out the official product page for more details on the board, including full schematics, GPIO pinouts, 2D and 3D drawings, and TinkerOS downloads. And be sure to join the Tinker Board community at hackster.io.

If video’s more your style, hit the play button below.

Guides Eric Born - June 1, 2021
ASUS participates in several affiliate programs, including the Amazon Associates program, and may receive affiliate fees for qualifying purchases. There’s so much to celebrate at...

ROG and TUF Gaming bring RTX to everyone with NVIDIA GeForce RTX 3050 and...

News Eric Born - May 11, 2021
When NVIDIA introduced RTX technology to laptops with the GeForce 20 Series, ROG was ready with a range of new models. Armed with support...