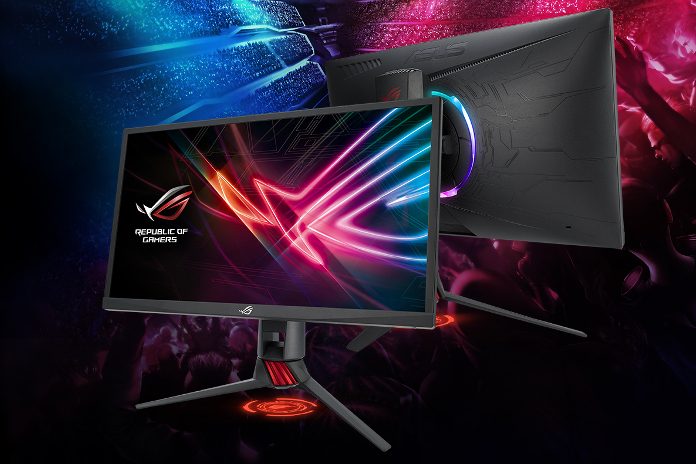 There are two competing variable refresh rate technologies living side by side. One is NVIDIA’s proprietary G-Sync, and the other is AMD’s FreeSync, which is based on the same protocols as VESA’s Adaptive-Sync standard. Up until now, a monitor equipped with variable refresh rate capabilities employed one technology or the other, leading to a bit of bifurcation for consumers.

But that’s changing. NVIDIA recently announced G-Sync Compatible, a certification program that runs monitors with baseline variable refresh support through a battery of tests. Those that pass are identified in the company’s drivers and have their variable refresh features enabled by default, allowing gamers with GeForce graphics cards to buy FreeSync-branded monitors and enjoy unprecedented smoothness right out of the box.

What’s variable refresh, and why do I care?

In short, variable refresh rate technology improves what you see while gaming by eliminating artifacts that affect monitors with fixed refresh rates. To appreciate how the tech makes your experience better, a basic understanding of the display pipeline is helpful.

The speed at which your GPU renders each frame in your favorite game varies based on scene complexity, causing frame rates to go up and down. In some places, the processor might crank out 120 frames per second. In others, it might slow to 45 or 30. Without a way to modulate the rate at which rendered frames are displayed, pieces of multiple frames show up together on a single monitor refresh cycle. Differences between those frames are painfully evident, especially when there’s lots of movement from one frame to the next. The resulting artifact is referred to as tearing.

Vertical synchronization, or VSync, addresses tearing by getting the graphics card to match the monitor’s refresh rate. But if your GPU cannot keep up with that cycle, old information persists on the screen for multiple refreshes, cutting your effective frame rate. On a 60Hz panel, you might end up with brief periods of 30 or even 15 frames per second. When performance drops and refresh cycles get skipped, the effect is perceived as stutter.

Some gamers are painfully sensitive to tearing. Others are bothered more by stuttering. But we can all agree that both sides of the VSync coin are far from ideal.

LCD monitors with support for variable refresh rates save you from choosing between turning VSync on or leaving it off. They can adapt to the graphics card’s frame rate within a predetermined range, refreshing whenever a new frame is presented. As a result, tearing and stuttering disappear. The difference in smoothness is incredible, even to gamers who never realized they were living with the caveats of VSync.

Previously, all monitors with G-Sync branding had to have a proprietary NVIDIA module inside featuring an expensive FPGA and 768MB of DDR3L memory. This module took care of the technology’s heavy lifting and ensured a consistent experience across a range of native resolutions, refresh rates, panel technologies, and price points.

But NVIDIA allows that there are lots of excellent monitors out there capable of satisfying its standards for a high-quality variable refresh rate experience. Those displays can now become “G-Sync Compatible.” 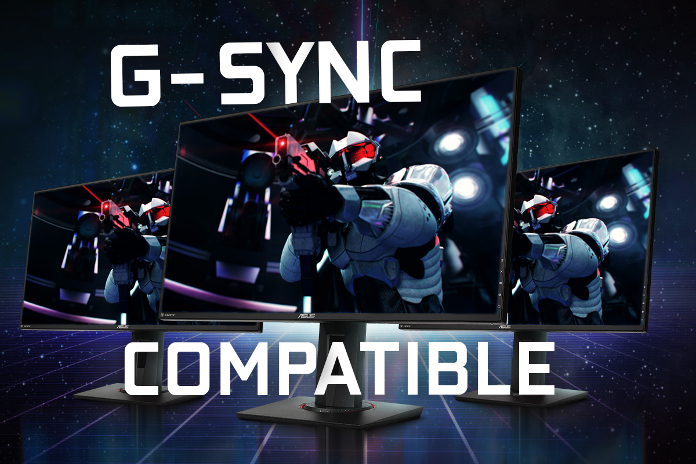 The classification is earned only by monitors that support a variable refresh range of at least 2.4:1 (60 to 144Hz, for example). A nice, big window ensures that qualifying monitors spend as much time in variable refresh mode as possible, yielding an optimal gaming experience. G-Sync Compatible monitors must also prove that they can avoid “blanking, pulsing, flickering, ghosting or other artifacts during VRR gaming,” per NVIDIA.

Displays that earn G-Sync Compatible branding will have their variable refresh capabilities enabled by default in NVIDIA’s latest Game Ready driver. Monitors that haven’t been validated, but support variable refresh technology, can be experimented with using a tick box in the NVIDIA Control Panel. You’re rolling the dice at that point, though. It’s best to be safe and stick with one of the G-Sync Compatible models. We have several, and there are more to come. 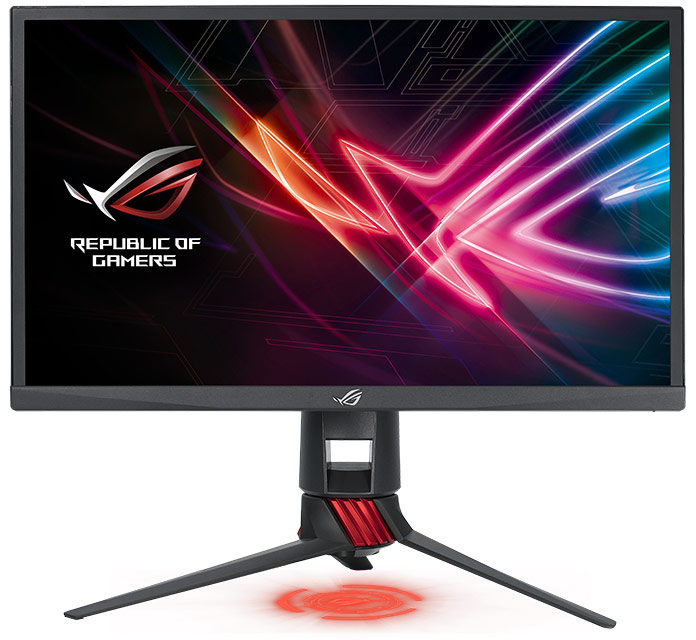 The ROG Strix XG248Q is built with speed in mind. Its 24” 1920 x 1080 panel features a blazing-fast 240Hz native refresh rate, which is great for twitchy first-person shooters and esports titles. But even if your graphics card doesn’t push 240 FPS to the XG248Q, the monitor’s generously wide 48 to 240Hz dynamic refresh range all but assures you get smooth animation in every game you play.

On its own, a 1ms gray-to-gray response time helps minimize ghosting. However, ASUS Extreme Low Motion Blur technology can be used to deliver perfect motion clarity with Adaptive-Sync disabled and a refresh rate of 100Hz, 120Hz, or 144Hz.

The display is framed by thin bezels all the way around and set off by the iconic ROG tripod stand. You can pivot the monitor 90° to use it vertically, swivel 50° side to side, tilt it back, and slide the screen up or down to get the most comfortable view. A bright beam of light emits from the base, projecting a rich, red glow onto your desktop. Pop on one of two ROG logo covers or customize the bundled blank cover to create your own projection. Moreover, the ring around the XG248Q’s stand mount supports Aura Sync lighting, so you can match its RGB LEDs to the lighting scheme of your other ROG gear.

Input options on the XG248Q are plentiful: you get two HDMI 2.0 ports and a DisplayPort interface. AMD’s FreeSync technology works across any of the three inputs, while GeForce GTX 10-series and RTX 20-series cards support variable refresh rates over DisplayPort. The monitor also boasts two USB 3.0 ports and a 3.5mm audio output for your headphones. 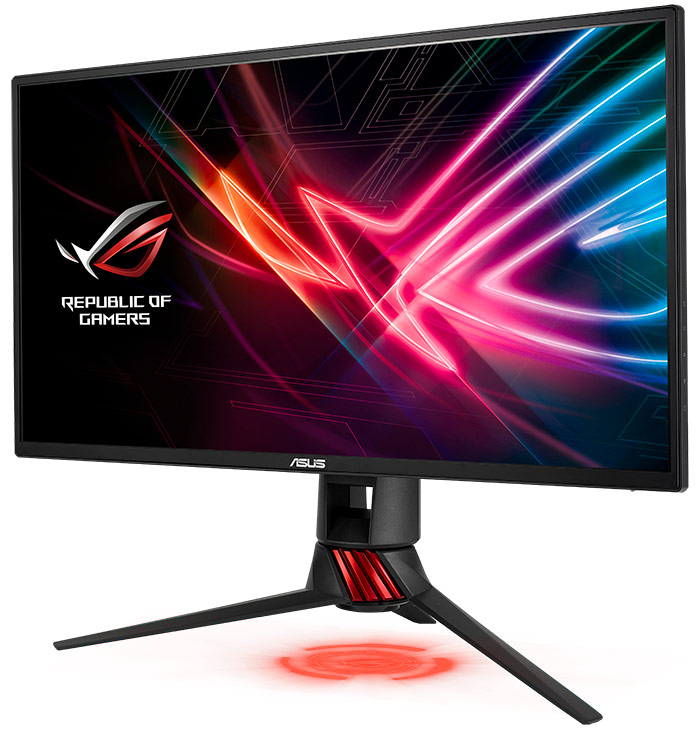 At 25”, the ROG Strix XG258Q plays big brother to the XG248Q. Other than the slight size difference, they’re almost identical. Both serve up an exceptional 240Hz refresh rate, 1ms response times, and support for Extreme Low Motion Blur technology. They’re mounted to the same versatile stand with a customizable LED projection and feature super-narrow bezels ideal for multi-display setups.

The most significant difference between the two monitors is their inputs. Both offer two HDMI ports and DisplayPort 1.2 connectivity. However, whereas the smaller XG248Q includes two HDMI 2.0 connectors, the larger XG258Q is equipped with one HDMI 1.4 and one HDMI 2.0 interface. Again, FreeSync is supported across all three ports. NVIDIA’s G-Sync Compatible program works through VESA’s Adaptive-Sync spec, which is part of the DisplayPort standard.

The XG258Q also drops its USB 3.0 ports. As a result, the RGB LED ring around the stand mount can be set to one of five different lighting effects, but not explicitly linked to your other Aura Sync-compatible gear. 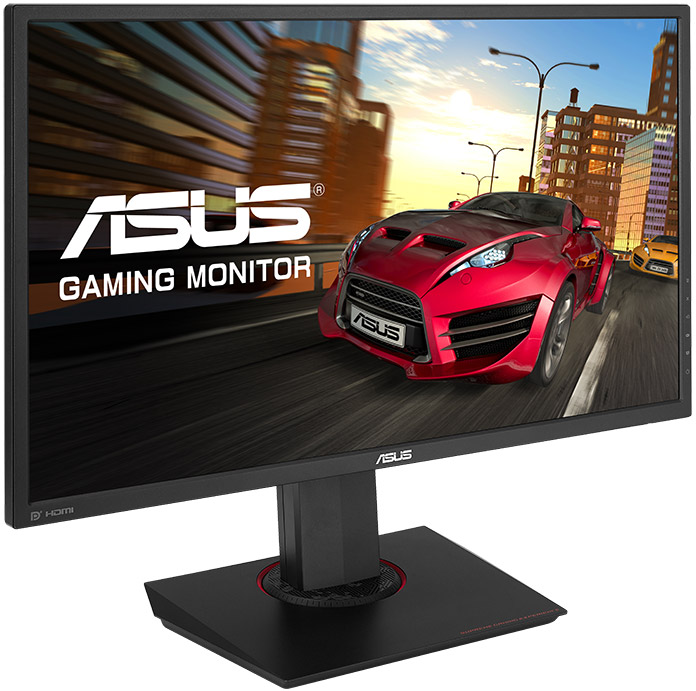 The MG278Q gaming monitor steps variable refresh rates up to a 2560 x 1440 resolution. Its 27” panel features a 144Hz native resolution and a 1ms gray-to-gray response time. But because this is one of the few models qualifying for G-Sync Compatible branding, GeForce GTX 10-series and GeForce RTX 20-series cards can dynamically drive it at rates between 40 and 144Hz, yielding smooth gameplay across a broad performance range. Of course, FreeSync support enables similar functionality with compatible Radeon graphics cards.

Plenty of inputs accommodate any generation of GPU you have installed. One HDMI 1.4 port, one HDMI 2.0 interface, and DisplayPort 1.2 connectivity match the XG258Q and facilitate variable refresh support. But there’s also a dual-link DVI input for attaching older devices. A 3.5mm jack takes the audio stream from an HDMI or DisplayPort cable and pipes it into your gaming headset. Moreover, a USB 3.0 upstream jack is split into two downstream ports for your gaming peripherals. A pair of 2W speakers built into the MG278Q give you audio when you can’t be bothered to don headphones.

The stand is svelte and unassuming. Its professional aesthetic belies this monitor’s gaming roots. Smart cable management helps hide cords to keep your battle station looking clean. Similar to the XG series’ showier stand, you can rotate the MG278Q side to side, slide it up and down, tilt it, or pivot to your liking. 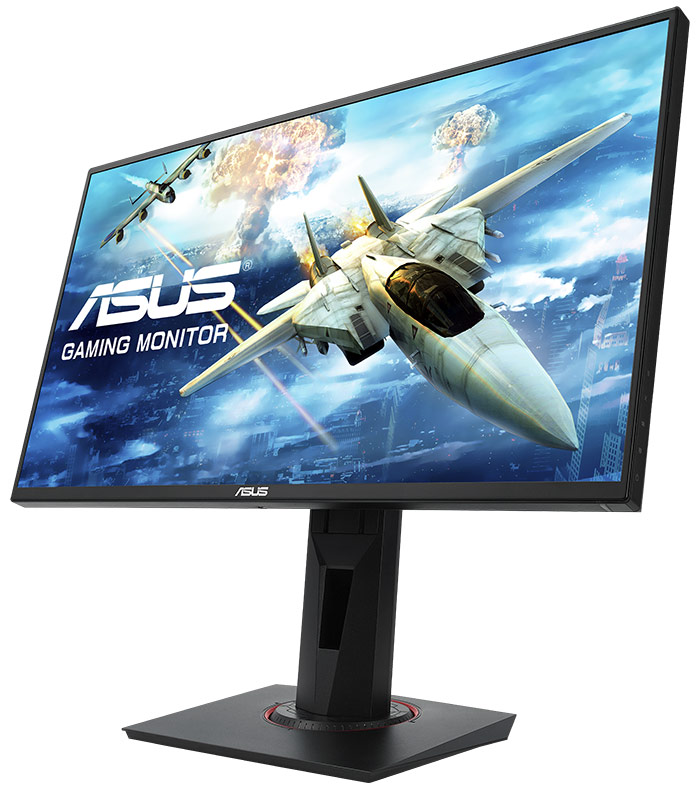 The VG258Q looks a lot like the MG278Q. It rests on the same stand and similarly benefits from smart cable management. Ultra-thin bezels and flexible adjustments check the ergonomic boxes we like to see addressed. Yet, an emphasis on gaming performance is unquestionably this monitor’s greatest strength.

A 25” form factor is just right for the VG258Q’s 1920 x 1080 resolution. Its 144Hz native refresh rate is great for serving up smooth gaming. But enabling FreeSync (with a compatible Radeon card installed) or G-Sync Compatible mode (on a modern GeForce GPU) improves your experience even more with a variable refresh range between 40 and 144Hz. Between those two bounds, the GPU and monitor sync up to ensure you don’t see any tearing or stuttering artifacts. A 1ms response time is great for minimizing the effects of ghosting during fast-paced action. And built-in support for Extreme Low Motion Blur technology improves clarity even more.

ASUS’s VG258Q gives you one HDMI input, one DisplayPort connector, and a dual-link DVI port for compatibility with older graphics cards. There’s no USB hub on the VG258Q. But it does give you an audio input, taking the signal from your PC’s motherboard to drive integrated 2W stereo speakers or the headphone output. 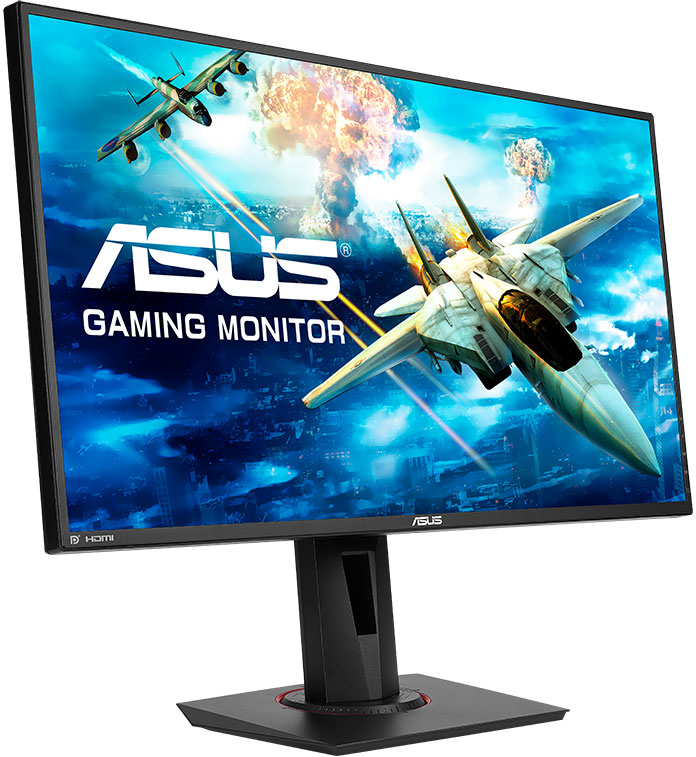 Splitting the difference between our MG278Q and VG258Q, the VG278Q sports the same 27” form factor as the former, but otherwise has identical specifications and features as the latter. It serves as a larger option for gamers who crave a bit more screen real estate than what the VG258Q offers.

A 1920 x 1080 resolution, 144Hz native refresh rate, and 40 to 144Hz variable range are all attractive attributes at the VG278Q’s affordable price point, particularly now that the monitor also boasts a stamp of approval from NVIDIA’s discerning G-Sync Compatible program.

The G-Sync Compatible initiative is still very new, and ASUS dominates the early list of displays able to pass NVIDIA’s long list of tests. These metrics determine whether variable refresh capabilities are enabled by default in the GeForce driver. So, when you purchase one of the aforementioned models and hook up to a GeForce GTX 10-series or RTX 20-series graphics card, you can expect a smoother gaming experience right out of the box.

There will be more ASUS monitors added to NVIDIA’s list over time, so stay tuned.