WS and Prime do more than just gaming

The recent resurgence of PC gaming is partly responsible for the litany of gaming boards in our lineup, but desktops can do a lot more, especially with eight CPU cores at their disposal. Our WS and Prime motherboards are more businesslike in their approach, with an eye toward professionals and prosumers building powerful machines geared for productivity instead of play. They also appeal to enthusiasts and even gamers who want many of the same features with an entirely different look.

The WS Z390 PRO loads up on expansion capacity for Coffee Lake workstations, while the Prime Z390-A hits the sweet spot ASUS aficionados expect with each new generation. Basic builds can get by with the Prime Z390-P and Z390M-PLUS.

Put workstation power within reach on the WS Z390 PRO

GPUs do more than just sling frames per second in games. They’re vital for 3D modeling and rendering work, and their vast arrays of highly optimized cores can be programmed to accelerate a broad range of functions from scientific computing to machine learning. This type of work typically benefits from adding more GPUs, so the new WS Z390 PRO is equipped to host four double-wide cards connected directly to the CPU. 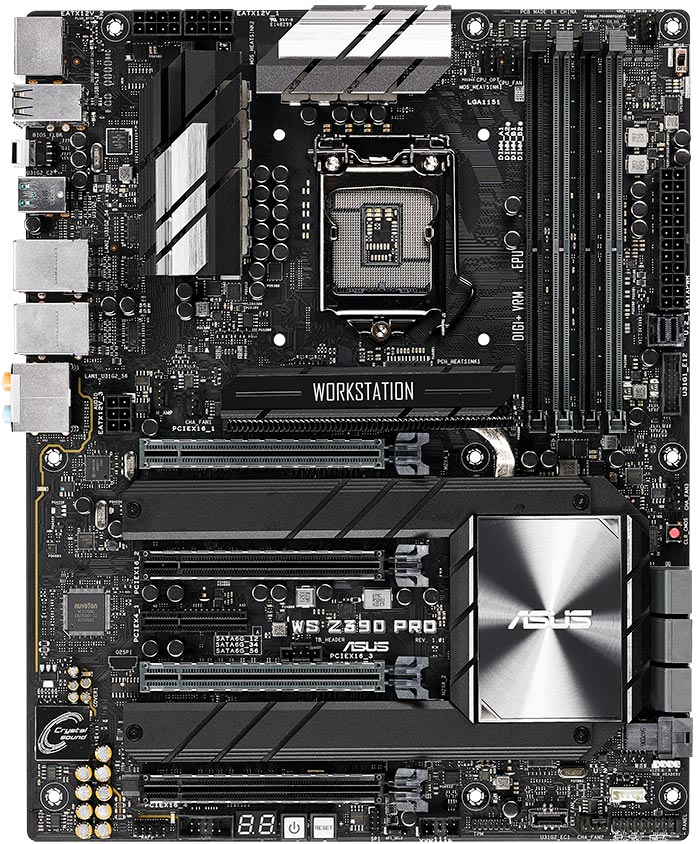 Since Coffee Lake processors only make 16 PCIe lanes available to devices, we add a PLX bridge chip to split them evenly. Each of the physical x16 slots can connect to the chip with an eight-lane link sufficient for four-way SLI certification. Although the pathway to the CPU is still only 16 lanes wide, the bridge reduces traffic by passing communication between the cards directly, without involving the processor.

PCI Express lanes branching off the chipset are largely allocated to high-speed storage interfaces. Dual M.2 slots lurk under heatsinks and support longer 110-mm drives with higher capacities, while dual U.2 ports provide a cabled interface for enterprise-grade SSDs that incorporate their own cooling. Only one of the U.2 and M.2 slots share a PCIe link, so you can run a trio of four-lane NVMe drives simultaneously. Optional Pike kits add even more storage via eight-port SAS 12G RAID cards. 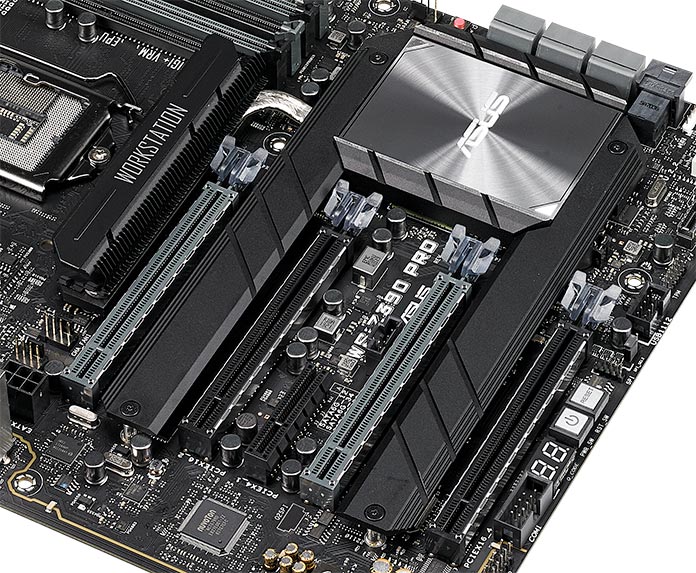 With HDMI and DisplayPort video outs for Intel’s integrated graphics, the WS Z390 PRO can load up on headless compute cards designed for GPU servers. It has an auxiliary six-pin power connector to supply extra PCIe power for a full complement of cards, plus an additional eight-pin jack to bolster the 12V line to the CPU. We didn’t hold back on the heatsinks, either, so you can push eight-core CPUs beyond stock speeds with confidence. The board supports automatic overclocking with AI or our 5-Way Optimization routine, plus the usual suite of manual tuning options, making it an appealing alternative for enthusiasts with more adult sensibilities.

Extensive connectivity adds versatility for power users with loads of devices. The USB payload is particularly impressive with 10 ports at the rear (including one for USB BIOS Flashback), plus six more internally. Dual LAN ports add a measure of redundancy and the option to achieve higher throughput with teaming, audio upgrades provide pristine output for listening to music while you work, and plentiful fan headers can power cooling for your entire rig.

Although the WS Z390 PRO is designed to squeeze hardcore GPU horsepower into a desktop workstation, it still knows how to let loose. Expect it to hit shelves soon.

Where WS takes the platform to a workstation-level extreme, the Prime Z390-A focuses more tightly on prosumers who want to balance features and performance with elegant design. Its patterned aesthetic and gleaming white accents nudge Prime in a new direction while staying true to the series’ roots. The board looks unique with or without Aura Sync lighting shining through its bejeweled I/O cover and highlighted PCH heatsink, and more illumination can be added via the header for RGB strips. 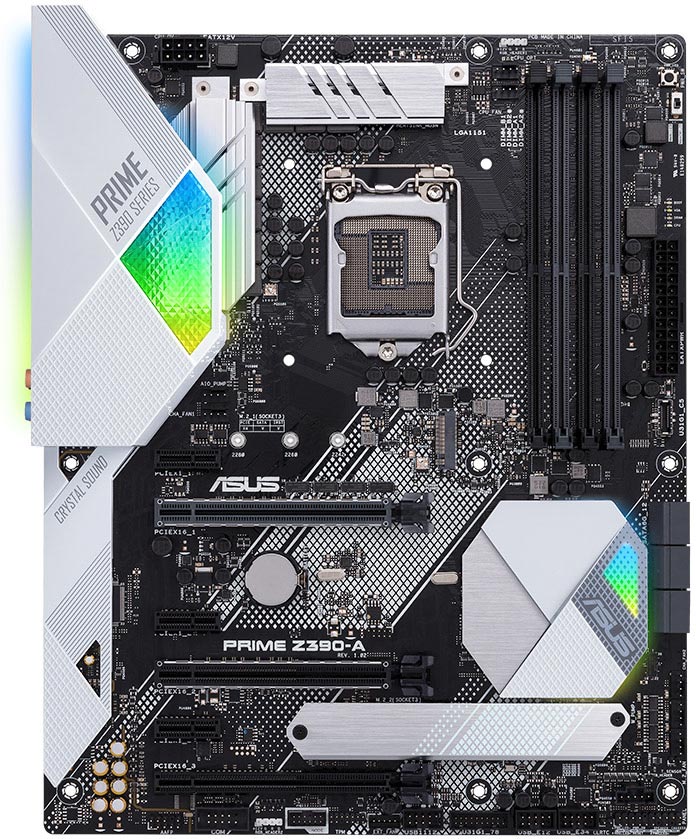 People flock to the -A because it does such a good job of collecting all the essentials for enthusiast builds. You get new features like AI Overclocking and a Node connector, along with signature staples like advanced cooling controls that regulate airflow and acoustics for a plethora of fan headers. There’s even a secondary pump header for more involved liquid cooling.

The spec sheet has at least one of almost everything except integrated wireless. In some cases it doubles up, supporting two-way SLI graphics setups via fully reinforced SafeSlots, and dual NVMe SSDs through a pair of M.2 slots. The SSDs can run on their own or join forces in a RAID array that boasts better performance. 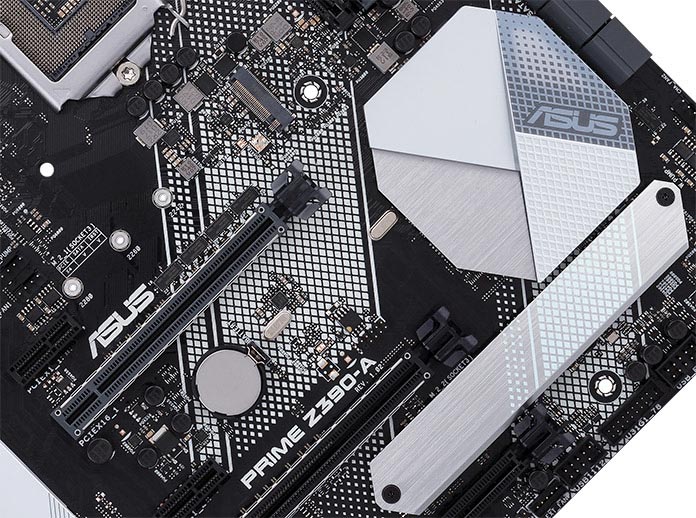 As on the WS, the Crystal Sound 3 audio meets the same SNR standards as the best ROG boards in our Z390 series. Headphone amplification is integrated into the S1220A codec, which combines with premium capacitors, enhanced power regulation, and a unique de-pop circuit to improve sound quality. DTS Headphone:X creates virtual surround-sound environments with stereo headsets, immersing you deeper into games.

With everything you need and nothing wasted on unnecessary indulgences, the Prime Z390-A stakes our claim to the sweet spot at $189.99 USD and $246.99 CAD. Buy it today from the vendors listed above.

Our most affordable motherboards for 9th Generation Intel Core processors are the Prime Z390-P and Prime Z390M-PLUS. These models simplify the script to focus on delivering the basics in a reliable package that still offers splashes of excitement. 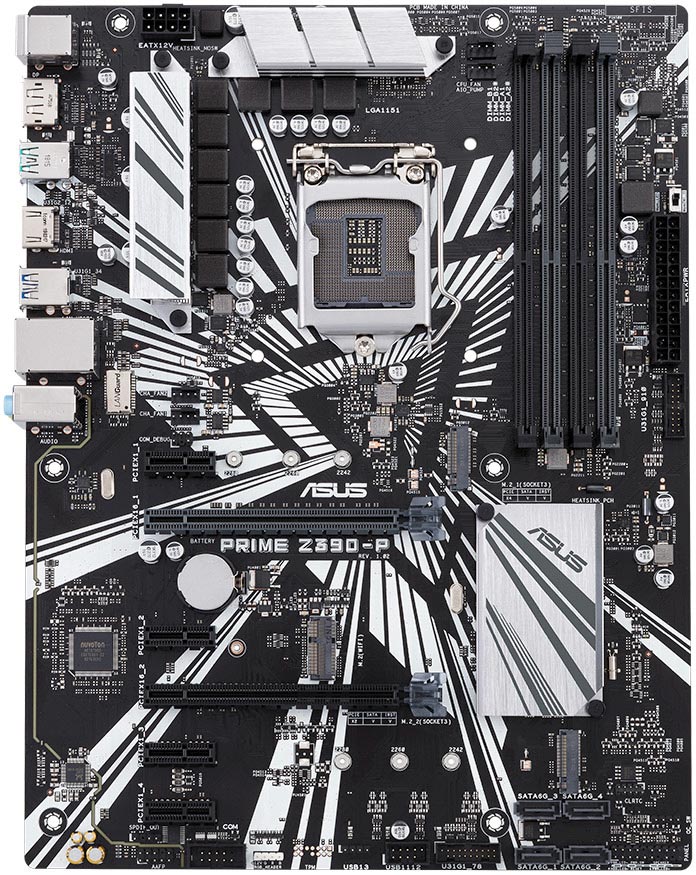 The bold designs silk-screened onto the circuit boards add futuristic flair that doesn’t need lighting to stand out. You can still add your own the header for RGB strips on each board, although lighting control is more limited than the Aura Sync implementation on our other boards.

We use digital VRMs exclusively even at this level, ensuring precise power delivery to the CPU, and add the same OptiMem II grounding and trace optimization found on much pricier models.  These boards offer the same FanXpert 4 features as the rest of the family, just with fewer fan headers and none preconfigured for liquid cooling. You can still tune the behavior of multiple connected fans and have them react intelligently to GPU-heavy gaming loads. Like on the TUF Gaming boards, the tweaking options are mostly manual, though you can get a quick-and-easy boost from multiple predefined OC Tuner profiles available in the UEFI. 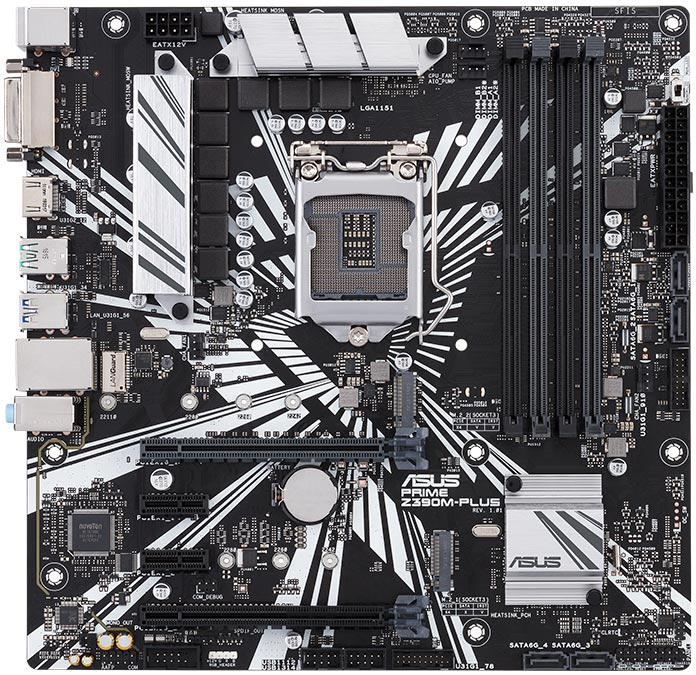 Dual M.2 slots are still standard, and at least one on each board is compatible with SATA-based “gumstick” SSDs. Support for Intel Optane Memory lets you accelerate access to frequently used files stored on a much larger hard drive, providing plenty of possibilities for different storage setups you can upgrade over time. With dual USB 3.1 Gen 2 ports on each board, you can also tap into high-speed external drives.

For builders on a budget, the Prime Z390-P offers a full-sized ATX layout with enough expansion for future upgrades. It’s priced at $149.99 USD and $194.99 CAD and available now from the retailers listed above. Check with your local ASUS rep about Prime Z390M-PLUS availability in your region.