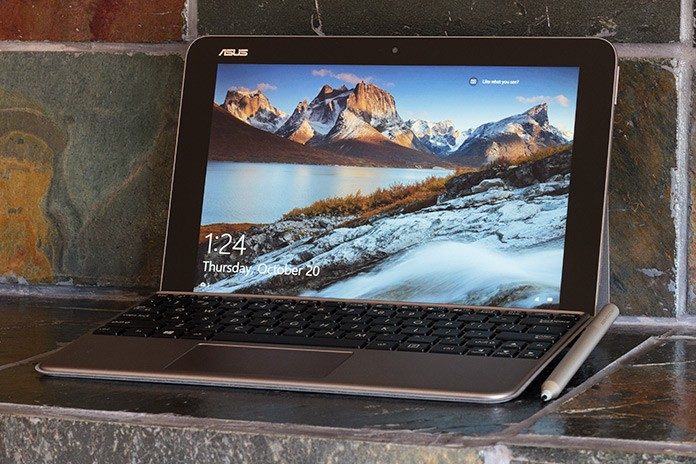 More than five years ago, the original ASUS Transformer redefined tablets by pairing a conventional slate with a tightly integrated keyboard sidekick. This dynamic duo offered the convenience of a tablet for surfing and entertainment with vastly improved input for communication and productivity. Crucially, it also did so at an affordable price. The concept caught on and spawned a new class of device known as the 2-in-1.

Now may be a good time to coin another category: the Triple Threat. I’ve been playing with our latest Transformer Mini T102, and it’s much more than a typical Windows 10 2-in-1. The addition of a precise stylus to the tablet-and-keyboard formula unlocks a world of creativity that makes the T102 much more versatile than its predecessors. The stylus isn’t an optional extra, either; it’s included in the box, along with the keyboard, for just $399.

Premium features at an affordable price

Affordable pricing makes the Transformer Mini T102 accessible to everyone, but you wouldn’t guess by just looking at the thing. We’ve peppered the Transformer with premium features typically found on more expensive devices. For example, the tablet’s body is made of a magnesium-aluminum alloy instead of the plastic you might expect. It feels stiff and sturdy despite being just 8.2 mm thick and 1.2 lbs.

After the body is formed, the exterior is sandblasted to perfection. The resulting surface is impeccably smooth, with just enough grip for a light grasp. It looks great, too, and it doesn’t accumulate fingerprints and smudges with heavy use. There’s a certain understated elegance to the T102’s clean lines and subtle styling, especially the quartz gray version pictured above.

If you want to go hands-free, the stepless kickstand lets you prop up the tablet at any angle from practically vertical to nearly flat. Steeper angles work well for typical laptop use, while shallower ones are great for sketching with the stylus or typing at a standing desk. The kickstand works well even without the keyboard attached, letting the Mini easily squeezed into tight spaces like airline tray tables.

Well-equipped for the essentials

The 10.1″ display strikes a good balance between ample size for usability and compact proportions for portability. IPS-type panel technology produces rich colors with wide 178° viewing angles, so the picture looks great whether you’re sitting right in front of the screen or sharing it with someone else. You can even read the display outdoors thanks to a bonded touchscreen that reduces reflectivity and powerful backlight that pumps up the brightness. At 400 nits, the screen is brighter than on competing 2-in-1s.

The WXGA 1280×800 resolution is understandably lower than on pricier alternatives, but the picture is still reasonably sharp at normal viewing distances. There’s enough screen real estate and resolution to handle the basics, which is what the T102 is designed to do.

Web surfing, video streaming, and productivity applications all run smoothly on the Transformer’s Intel Atom x5-Z8350 processor. The chip has quad cores clocked up to 1.9GHz, so you can even get away with light multitasking and simple photo editing. The accompanying 4GB of RAM helps performance feel snappy with multiple applications and browser tabs on the go. You can easily work on documents while streaming media, surfing the web, and chatting with friends.

Gaming is on the table, too. The integrated Intel HD Graphics 400 GPU is potent enough to play plenty of indie games, including personal favorites like Super Meat Boy, Race the Sun, Bastion, Thomas was Alone, and Mark of the Ninja. You can also run Minecraft and more casual titles like Candy Crush. Hardcore games are too demanding for the T102’s processor, but they can be streamed from a more powerful PC via Steam’s in-home streaming feature. Although not quite the same as playing locally, the experience is still quite enjoyable. There’s something a little bit surreal about playing Doom and Project Cars on such a small, inexpensive tablet.

Even when pushed to the limit by games, the T102 stays blissfully quiet. Its Atom processor has a power envelope of just two watts, enabling passive cooling that’s completely silent regardless of the system load.

The low-power chip also contributes to excellent battery life. Internal testing pegs the Transformer’s run time at 11 hours, which sounds about right based on my experience with the system over the past week. As long as you avoid too much heavy lifting, the 32Wh battery can make it through the day on a single charge. You don’t need to seek out a wall socket to top up, either. The Transformer Mini can be charged with portable battery packs like our ZenPower, making it ideal for travelers, road warriors, and others who are constantly on the go.

Charging happens over Micro USB, leaving a high-speed USB 3.0 port available for peripherals. You also get a Micro HDMI output primed for projectors, big-screen TVs, and auxiliary monitors. Wireless connectivity includes dual-band 802.11ac Wi-Fi and Bluetooth 4.1, so all the bases are covered.

The top edge of the tablet hosts a MicroSD slot that supports cards up to 512GB. You probably won’t need that much additional storage, though. The T102 comes with a whopping 128GB of internal flash, leaving loads of room for applications, games, media, and other files. Being able to easily add more storage is icing on the cake.

Flexible input from a keyboard and stylus

Some of the Transformer’s inputs and outputs are fairly conventional. The 2MP webcam is ready for video chat, the dual microphone array is tuned for Cortana, and the analog audio jack works with existing headsets and earbuds. Others, like the integrated fingerprint reader, are typically confined to much pricier devices.

The reader is located around the top edge, making it easily accessible no matter how you’re using the tablet. Authentication is nearly instantaneous—and much simpler than tracing a pattern or typing a password or PIN. Compatibility with Windows Hello allows the fingerprint reader to be used by third-party websites and applications, so its utility can extend well beyond unlocking the system. As an additional layer of security, the T102 offers fTPM compatibility for trusted corporate computing.

The included keyboard cover fills the Transformer’s 2-in-1 requirements. The invisible grasp of rare-earth magnets attaches it to the tablet, so the two pieces quickly snap together and pull apart. This physical connection lets the keyboard draw power from the tablet and eliminates any latency that might exist with a wireless link.

Despite its compact proportions, the keyboard feels surprisingly spacious and comfortable. I’ve happily typed the vast majority of this article with it perched on my lap. The keys have 1.5 mm of travel and distinct feedback, which minimizes typos and gives me the confidence to ramp up to a frenzied pace during bursts of inspiration. They’re paired with a smooth touchpad that’s often more efficient than reaching up to poke the touchscreen. The touchpad supports a stack of Windows 10 gestures, some of which can be tied to different functions via the Settings menu.

While the keyboard expands the Transformer’s capacity for productivity, the stylus unleashes its potential for creativity. The active pen tracks precisely with a pressure-sensitive tip that lets artists show a little extra flourish. Input is extremely responsive, with impressively low latency for an entry-level device. There are also two buttons that provide convenient shortcuts to functions like erasing and right-clicking.

I’m not much of an artist, as the scribbling clearly shows, but I still find sketching with the stylus surprisingly satisfying and addictive. The experience is much better than with the passive pens usually associated with tablets, especially since the screen intelligently ignores inadvertent touches when the stylus is in range. Windows 10’s excellent pen-based input support makes the stylus even more useful, as do the markup tools integrated into the operating system and Edge browser.

Combined with the stylus, the included copy of OneNote turns the Transformer into a flexible note-taking machine that can quickly transition from text to diagrams and other doodles. Mobile versions of Word, Excel, and PowerPoint are included, as well. Other pre-installed software is kept to a minimum, but you can download official ASUS utilities to tweak the picture profile, filter blue light output, and enable touchscreen shortcuts like tapping to wake and drawing gestures to launch specific applications.

The keyboard cover and stylus expand the Transformer Mini T102 12.9 mm thick and 1.8 lbs, so the full package is still incredibly portable—and eminently affordable. For only $399 in the USA and $549 in Canada, the T102HA-D4-GR variant we tested includes the keyboard cover and active stylus, plus 4GB of RAM and 128GB of internal storage. No other 2-in-1 comes close to offering the same functionality and value right out of the box, making the T102 uniquely appealing for students, artists, and anyone who wants to do more with their mobile PC.

The Transformer Mini T102 is available now from the following retailers: